I study phytoplankton, the base of the oceanic food chain and the producers of half the of oxygen in our atmosphere, and the mechanisms that drive biodiversity amongst their ranks. There are tens of thousands of autotrophic (photosynthetic) species that are classified as phytoplankton, and yet they coexist on a small number of resources. 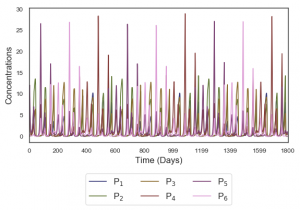 A result of classical land ecology called the principle of competitive exclusion states that if multiple species compete for a single resource under constant environmental conditions, there will eventually be a single winner. This question has been adapted by oceanographers into the equivalent paradox of the plankton.

Of course, unlike terrestrial environments, the ocean is a dynamic fluid, swirling with activity at both small and large spatial scales and involved in complex interactions with the atmosphere above. Furthermore, since they are at the bottom of the food chain, phytoplankton face grazing pressure from species at higher trophic levels. Thus, the assumption of unchanging environmental conditions for the principle of competitive exclusion is moot, and the paradox of the plankton is not all that paradoxical.

Three routes to coexistence that result from the lack of equilibrium in the ocean are:

Another means to coexistence, which can arise even in simple models that assume an unchanging environment and do not include any representations of predation, is a phenomenon known as competitive chaos, through which competition between multiple species for nutrients may result in chaotic behavior that can sustain weaker competitors.

I would like to better understand the relationship between these different routes to coexistence and have a clearer understanding of why the distribution of phytoplankton looks the way it does today.