In my last blog post, I wrote about a tool I developed called Slotenium. It simulates thousands of slot machine games to approximate the probability distribution of returns. The original goal was to try to determine some measures that are not directly available to players, such as volatility. But as it turns out, I made some unexpected discoveries about the returns on pirated slot games.

Over the past few years several articles have come out about online casinos using pirated versions of games. One source reported that a now-defunct online casino called Pravda was using Microgaming products hosted on illegitimate websites. Another reported that AffPower (which still exists) was using pirated NetEnt games on their platforms. I was able to find a demo version of the popular Buffalo slot machine game on a pirated website and decided to inspect the RTP. 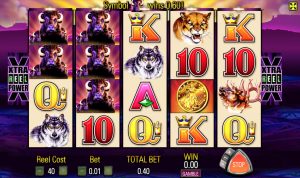 Buffalo is a classic five-reel slot machine released in 2008 by Aristocrat Technologies. You earn a win by landing the same symbol(s) on at least the first three reels. If you are lucky enough to get three or more gold coins, then you get free spins! You can rack up even more free spins if two or more gold coins appear during the free-spin feature. The sunset symbol acts as a wild under normal play, but also becomes a valuable win multiplier during free spins. Lastly, the buffalo symbol generally appears in stacks and can also lead to massive returns.

If an online demo version of Buffalo uses the proper random number generator, then our long-term gameplay experience should match the above. But if the return on the demo game is significantly higher, then the chances are that the game has been modified to instill overconfidence within potential casino customers.

A demo version of the Buffalo game is hosted here: http://supermegaslot.com/demo/game.php?game=3013

Run a Google search for “supermegaslot pirated” and you will find several articles on the illegitimacy of this server. If you inspect the source code in the link above, you will see that the game is actually served on another website located at “cdn.gamesapi.net”. This server is also cited in articles about pirated games.

The game above looks and feels like any other version of Buffalo – but I suspect that the random number generator is different. Below I present a brief analysis of the returns.

I ran roughly 15,000 simulations of this game and examined the distribution of winnings. One would have to run millions of simulations to get a truly accurate RTP, but this is sufficient to get a sense of whether the mean RTP is in the ballpark of the expected 94.85%.

The table below compares the average RTP and probability of winning something back on a single spin:

That’s right – the estimated RTP for Buffalo is a whopping 140%! It is difficult to play this demo version of Buffalo and lose all of your money ($1000 on 40 cent spins, by default). One would undoubtedly feel lucky all the time.

The probability of winning something back in this version of Buffalo is quite high at around 53.9%. Note that by winning we mean seeing a return greater than zero – even if it is less than the wager. But this is not necessarily unusual. It is possible that the true Buffalo game has frequent low returns and still maintains its high volatility on the larger wins. These two properties would then combine to make a medium volatility game. 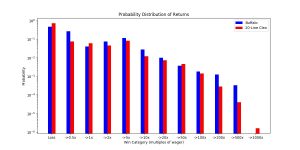 The red is 20-line Cleopatra, while the blue is Buffalo. The labels underneath the bars are categories that indicate the fraction of the wager won back. For example, the “->20x” category is for returns that were more than 10x the wager (the previous label) and at most 20x the wager. Cleopatra allows for wins that exceed 500x the wager, while Buffalo does not.

The most striking fact here is that the tail of the Buffalo distribution does not decay; there is not a massive drop in probability between the large win categories. You can win between 200x and 500x your bet roughly every 1000 spins, compared with every 10000 spins in 20-line Cleopatra. Thus, the frequent large wins are what likely overinflate the average return. One possibility is that bonuses, which I record as a single win over the entirety of the feature, occur more frequently in this version of Buffalo than the true version.

So there you have it! Some servers that host pirated games offer demos that use an improper random number generator. I think this is a pretty big deal! I’m curious if anyone else has played around with demo versions of slot machines and found something similar.

Note: If you’re looking for legitimate online casinos, I recommend asking Reddit, as you’ll be talking to real people rather than visiting some “trusted casinos” website of unknown origin.