My last post was on optimal wagers for slot machines, and this post is on the oddities of video poker in New York. My apologies to those who have no interest in gambling! I have a post in the works on finding the best spots for race photography (relevant to my Cheer Everywhere project). That’s next on the list!

As a NYC resident, the closest casinos are Empire City casino in Yonkers, and the Resorts World Casino in Queens. Because these casinos are attached to a racetrack, they are also known as racinos. They primarily feature slot machines, as described in my previous post. But they also contain video poker games. Video poker games are highly regarded among gamblers because they yield a relatively high RTP, or return to player, when played skillfully. The fact that skills influence the outcome of the game can make winning feel quite satisfying. Winning on slot machines is nice, but it all comes down to dumb luck!

However, in New York State, the above description is not necessarily true! If you’re gambling at a racino, chances are your game of poker is no different from a scratch-off lottery ticket. In fact, the state lottery collects the revenue from these games. This kind of poker machine is a Class II video lottery terminal, or VLT. Only casinos with Class III machines, which contain a random number generator (RNG), give you the expected payouts. The distinction between the Class II VLT and the Class III RNG machine is explained below.

The terminology of classes is derived from the Indian Gaming Regulatory Act, which distinguishes between the types of games offered at casinos on Native American reservations. Class II gaming refers to “bingo-like” games, in that the outcome of the game is completely by chance and all players are competing for the same pool of winnings. Class III gaming includes games that are neither Class II nor Class I (traditional Native American gaming), and there may or may not be some degree of skill involved in playing. We will use this terminology even for games that are not on reservations.

This document from 2006 does a great job at explaining why many video poker machines in New York State are a gip. The VLT is controlled from a central server. The server predetermines wins and losses among the pool of players and displays the results to the user. This makes it a Class II machine. Regardless of what cards the player decides to keep, if the decision is made in advance to grant a win, then the user will receive that win.

Some games offer a “match card” on each round to provide bonus winnings if the user throws away the cards required for a win. Others have a virtual “genie” that magically changes the cards to the winning hand. Throw away a royal flush? You’ll get it right back! (Though I won’t blame you if you decide not to risk it…) The only benefits of playing Class II video poker compared with the slots is that (1) it is relatively low volatility game, so you can obtain small wins frequently, and (2) taking the time to pick cards slows down your bets. It just means you’ll lose money more slowly.

In contrast, games that use an RNG (falling under Class III) do not predetermine a win in this manner. A chip within the machine generates random numbers, and the machine chooses the replacement cards accordingly. Whether a round of poker yields a win partially depends on which cards the gambler decides to keep. In a game of 9/6 Jacks or Better, the highest-paying standard version of one of the simpler video poker variants to master, perfect play can yield a RTP of 99.54% when a RNG is used. But on a Class II version of JoB, the winnings are pre-determined at whatever percentage the casino decides to pay back in the long term, even though the payout table is exactly the same.

It is worth noting that some VLTs can be Class III; in other words, they generate revenue for the state lottery, but the outcome depends on an RNG chip. This is the case in Rhode Island, for example.

Likewise, some slot-like machines are Class II. I say “slot-like” because technically slots are Class III under the Indian Game Regulatory Act, but slot-like bingo machines would be class II. In fact, all machines in some New York casinos are Class II, including the two that I frequent most often! Given that the outcome of slot machines is random to begin with, why distinguish between Class II and Class III machines of this type? This is because the distribution of winnings is different, even if the average RTP ends up the same. I would feel much better playing an individual game controlled by an RNG than a multiplayer bingo game controlled by a centralized server.

Where are the RNG-based Video Poker Machines?

As a New Yorker, where should I go to play proper video poker? One of the best websites for video poker players is vpfree2.com, which shows the locations of casinos, the poker variants they offer, and the payback percentages for each poker variant. The website does not even list Empire City and Resorts World Queens; there’s no point in playing their poker games!

The most obvious place to visit is Atlantic City, which has many many casinos with Class III machines. It’s not in New York, but it’s just a 2.5 hour trip by bus.

Bally’s, Caesars, and the Borgata all offer 9/6 Jacks or Better with 25 cents as the smallest denomination. This is where it’s at! 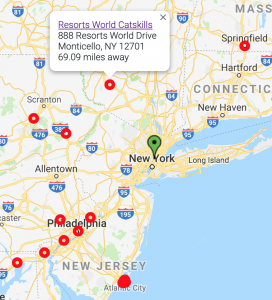 But note that the 9/5 Jacks or Better payout is only 98.45%, compared with the 9/6 payout of 99.54%. The games are also all high-denomination games, with the minimum bet being $1. They’re far better than Class II machines, of course!

If you’re looking to put your poker skills to the test and not willing to travel too far, Atlantic City is a clear winner. There are other casinos out there with decent games, like Mohegan Sun, but they are a 4+ hour trip from NYC by Greyhound. In any case – make sure to do your research before visiting a casino! Stay away from Class II machines. If you have any other tips or questions, leave them in the comments!